From Meltdown to Madness 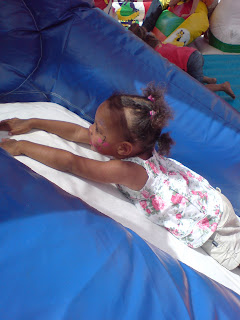 Well today has been a day like any other. Swimming was cancelled due to the pump in the old pool giving out and making the water unsuitable for swimming. Anyway, I still managed to get the social part the morning completed though. My girlfriend whos daughter does swimming around the same time as mine and I just caught up at a local coffee shop, so that was very sweet.

The weather that was previously promised to be raining, turned into a balmy 28 degrees celcius. Beautiful!! I washed and dried a mass of clothes, so should it rain tomorrow as promised I will be the opposite of naked.

I've discovered that due to daylight saving and the new foray into a 'real' bed, my daughter gets up an hour or more earlier than she used to (6am) which means that she is failing by 11am, and the only thing she can do is have the meltdown. Which today meant screaming down K-mart after she saw the colouring in books/the elmo doll/the bikes/the clothes/the toilet seat with Dora on it/the chocolates...face it anything really. It's funny though, the amount of disgusted, judgemental and disapproving looks I receive from the older population is amazing. I guess I'm meant to take the child out to the car (which I don't have) and belt the crap out of the two year old who doesn't know where to put all her feelings. Well that was the lessons in parenting 101 that I recall from their generation I received. I'm always amazed, not at mothers my own age who tend to be quite supportive; but the mothers of yesteryear whose patience has wained along with the memory of what it was to have to deal with a toddler 24/7.

It's funny, I don't believe that anyone else has to put up with my daughters screaming, but I still have to get from here home, and sorry, but I may have to pick up a loaf of bread before I go, considering I won't get out of the house for the next four or five hours.

When you're life is stressful or wearing anyway, it's so lovely just to get that smile and that positive vibe from someone, makes you feel like the whole world is a bit warmer, and that Mariah Carey-esk scream is not quite as loud.
Posted by Krys at 9:36 PM

Krys
Mother, artist, professional singer, writer, dancer and jack of all trades that allows me to do what I love. Originally from Sydney, Australia, I'm mother of two. Really enjoying my journey and am truly challenged by it. I'm trying to live a beautiful and truthful life.